Before the recent downturn stripped billions of dollars off the national property market, Brisbane shaped as one of the most at-risk cities of a crash.

Waves of apartments shooting to the sky had the city on the cusp of an oversupply of housing as debt levels soared.

But as the national market begins to show glimpses of stability after more than a year of falls, the Queensland capital has escaped largely unscathed, realestate.com.au chief economist Nerida Conisbee said.

According to Ms Conisbee, search activity on the site shows buyers are surging to the market with a number of suburbs primed for investment. 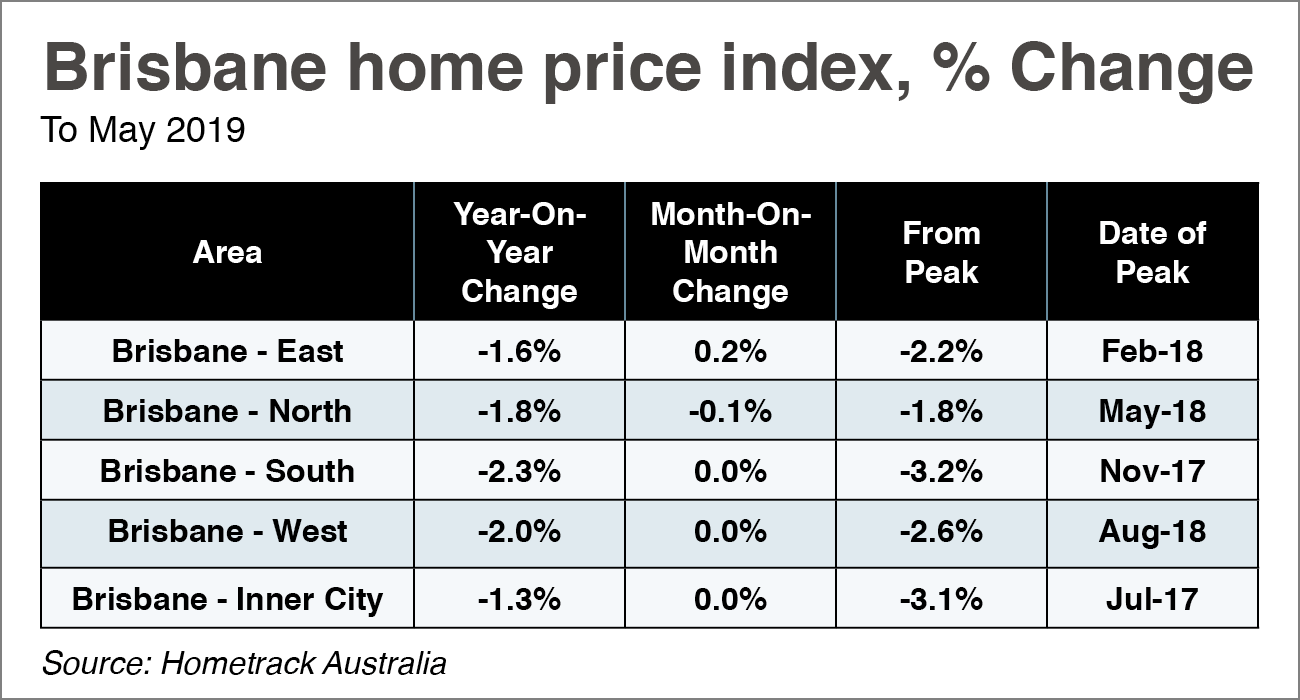 The city’s east had edged higher by 0.2 per cent, indicating to Ms Conisbee the sunshine state’s capital is poised for a resurgence.

“It did weather the downturn far better than Melbourne and Sydney, which was surprising in some ways given how much development took place in Brisbane,” she told news.com.au.

“At one stage, the very high levels of development were starting to cause a lot of concern around vacant apartments and people taking on loans that were too big.

“It looks like those risks flowed through pretty quickly, and the market has come out of the end quite resilient.”

Paddington, Toowong and New Farm were the most in-demand Brisbane suburbs with each listing attracting more than 10,000 views on realestate.com.au, Ms Conisbee said.

This wave of activity was also underlined by the favourable property policies of a Scott Morrison-led Coalition forming government as well as interest rates being slashed to record lows.

“We are seeing very high views per listing, and when you talk to agents in those markets, they are saying there’s a lot of buyers out there at the moment,” she said.

Overseas house hunters have deserted Melbourne and Sydney and flocked to Brisbane, where interest from Indian-born investors has jumped by 110 per cent.

The Queensland capital was also popular with buyers from Malaysia, Singapore and the United Kingdom, said Ms Conisbee.

Comparison site Finder is tipping the Reserve Bank to back up last month’s rate cut with another slash on Tuesday.

Nearly 70 per cent of experts and economists from Finder’s cash rate survey expect another 25 basis point reduction, which would set a new record low of 1.00 per cent.

Most say the RBA governor Philip Lowe will end the cuts at 0.75, but one third expect the rate to tumble to 0.50 per cent, which would leave lenders scrambling to keep up with mortgage rate cuts, says Finder insights manager Graham Cooke.

“The RBA will have its scissors out for the foreseeable future to try to stimulate inflation and reduce unemployment, and lenders should be ready to follow suit,” Mr Cooke said.

“The heat is on for those banks who only passed on a partial rate cut (less than 25 basis points) after the June rate reduction.

“Doing the right thing by their customers this time around — by passing on a cut in its entirety — could see them redeem themselves.”

Most experts and economists believe Dr Lowe will opt to cut the rate twice by Christmas, but Nicholas Gruen of Lateral Economics says he may be better off slicing more than 0.25 per cent in one hit.

“I’ve argued that larger steps than 25 basis points would be apposite, but smaller ones convey a less panicky picture to onlookers,” Mr Gruen said.

Last week, Australian Bureau of Statistics figures revealed all capital cities median house prices fell in the three months to March, slicing off more than $170 billion from the total value of the country’s dwellings.

But stronger commodity prices have led to a number of mining towns dramatically increasing in value. 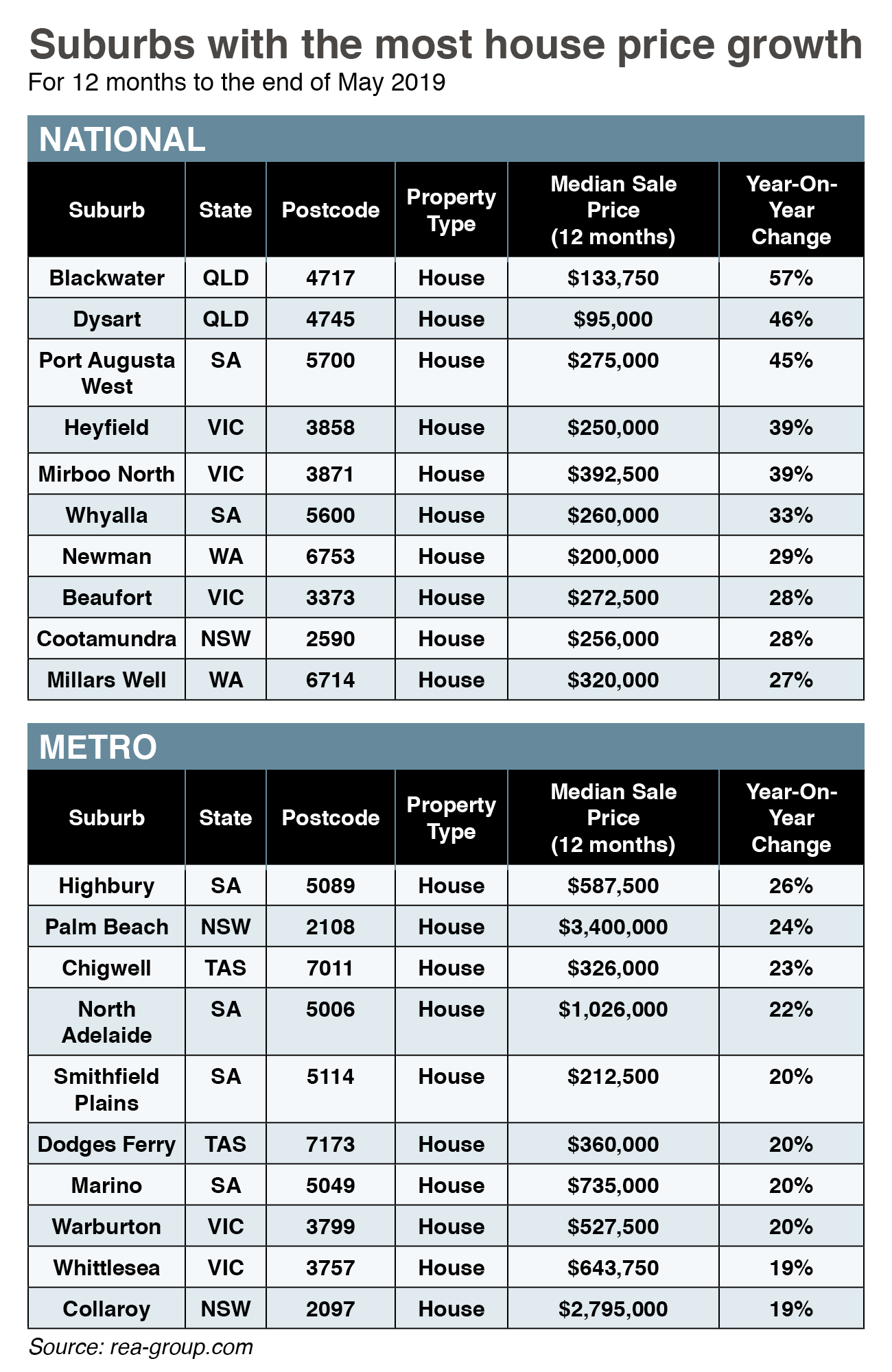 Property prices in remote towns shot to dramatic levels between 2003 and 2012, fuelled by the mining boom in the resource sector.

As those projects began to wind up by 2013, a lot of the temporary jobs disappeared and the residents vacated, said SQM Research chief executive and property analyst Louis Christopher.

Residential vacancy rates rose, and the value of those properties plummeted.

The median house price in the Western Australian iron ore town Karratha rose to more than $1 million during the boom but has now fallen to about $300,000.

Towns exposed to new projects are now experiencing a healthy upswing in value.

“Especially in those mining towns that have an exposure to iron ore.”

Mr Christopher said the collapsing property markets through the mining downturn less than a decade ago should serve as a “massive cautionary tale” for those wanting to invest.

“Mining towns, in terms of property investment, is not for the novice investor,” he said.

“I would only suggest it for experienced property investors who would potentially buy only one property in what would be a diversified portfolio to begin with.

“You would not want to put all your eggs in one basket for mining towns at all.”